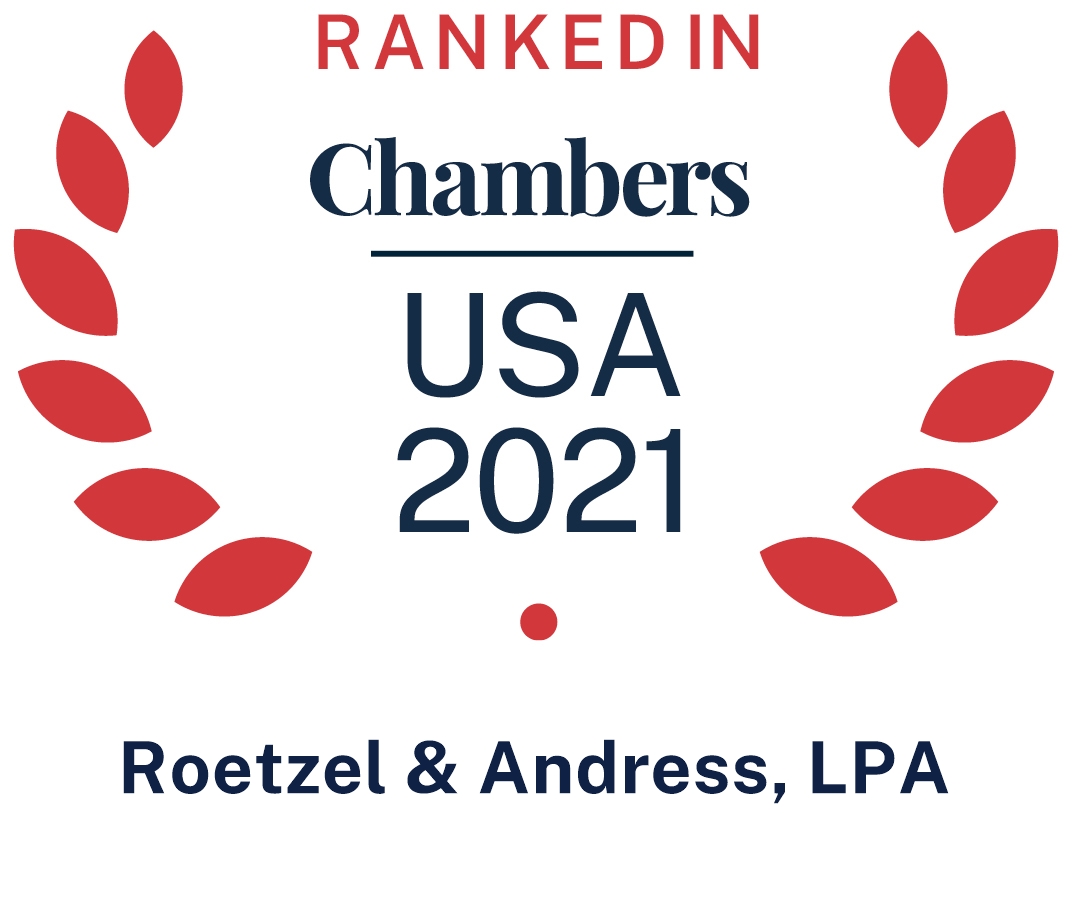 Chambers USA, the nationally recognized client guide of America’s top law firms and lawyers, released its 2021 edition today that includes Roetzel & Andress among its prestigious rankings. The firm’s Natural Resources & Environmental Group has once again been identified as an industry leader in Ohio, while four of the firm’s shareholders have been individually ranked as leading lawyers in their respective practice areas.

Earning a Band 3 ranking, Roetzel’s Natural Resources & Environmental Group is noted for its expertise in civil and criminal environmental enforcement actions, regulatory negotiations and permitting matters, and maintains a fine reputation for its representation of clients before various environmental agencies including the EPA.

Columbus Shareholder Shane A. Farolino, Practice Group Manager of the Environment, Energy and Health & Safety Group, earned a Band 1 ranking. He has been selected by Chambers as a leader in the field of Natural Resources & Environment since 2004. Mr. Farolino was noted for his strengths that include “environmental litigation and negotiation, extensive working relationships within the legal and regulatory community and a long history of success.”

Terrence S. Finn, an Akron shareholder in the Environmental, Energy and Health & Safety Group, received a Band 2 ranking. Mr. Finn has been selected as a leader in Natural Resources & Environment in Ohio since 2006. According to Chambers sources, Mr. Finn is “knowledgeable, approachable, calm and a pleasure to work with. His strengths are his expertise, responsiveness and practicality.”

Thomas L. Rosenberg, a shareholder in the firm’s Business Litigation Group in Columbus, has been ranked in Band 2 for Ohio Construction. Mr. Rosenberg has successfully litigated construction cases in courts throughout Ohio and the Midwest and has a reputation as an excellent trial lawyer. He has been honored by Chambers as a leading construction lawyer in Ohio since it began ranking U.S. law firms and lawyers in 2003. Chambers noted that Mr. Rosenberg “comes highly recommended for his skill in handling contentious matters, typically for contractors.”

Donald S. Scherzer, a shareholder in the firm’s Business Litigation Group in Cleveland, ranks in Band 3 for Litigation: White-Collar Crime & Government Investigations. Chambers noted that Mr. Scherzer “is widely respected for handling the defense of white-collar criminal cases as well as advising on complex civil and criminal antitrust disputes.” He has been a Chambers leading lawyer since 2012.